On November 17, 2013 a wave of strong storms ripped through the communities in northern and central Illinois. The storm produced 24 tornadoes in that state alone. One twister became EF-4 in strength and stayed on the ground for 46 miles. Sadly, seven lives were lost and 2,400 houses were damaged or completely destroyed.

On January 10, 2014 a group of 13 volunteers from Headwaters Relief Organization headed to Washington, Illinois and the surrounding communities for a long weekend to help people continue the process of repairing their homes and clearing debris. On Saturday we worked through Bethany Community Church , a Baptist church, helping to gut a basement (removing wet sheetrock and carpet) and perform interior debris cleanup on residents’ homes.  A second group sorted debris still left in many people’s yards. A community member with a bobcat would take stuff out of the piles and shake it loose to make it easier to sort, and another was hauling away debris to be sorted at the dump. This was definitely the dirtiest project of the trip, but still not as dirty as the pool we mucked out in Boulder in October. 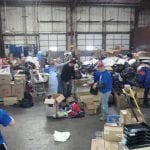 Sunday’s projects included clearing debris outside a reservoir and trail in Washington. We also assisted a woman who had lived in her house for 57 years who was looking for personal belongings among the debris. One thing we found was her husband’s wallet! As on the first day, freezing temperatures made it difficult at times to sort and move debris. On Monday, we helped a warehouse in Peoria sort through donated goods before heading for home.

Due to a strong volunteer response right after the storm many residents were able to clear out their homes in order to receive insurance evaluations and contractor bids. However, many families were not as fortunate, and must wait until spring to move forward with rebuilding.  One of the homeowners we met lost her home, as did her parents. They told us they hid in a closet in the basement, and the tornado took out their home in only 15 seconds. We managed to enter their basement through an opening in the ground where the basement stairs used to be. Our volunteers worked alongside this family to help them gut the basement and tear out carpet.

We’ve seen in areas like Moore, Oklahoma and Washington that tornados take a random path, leveling some homes while sparing others nearby. In fact, it’s often easy to see the path of destruction a tornado takes through a community. Several of volunteers commented that this trip was comparable to Oklahoma because of the “wide open spaces” created by the tornado. With so many demolished houses and trees gone, the lack of landmarks was often disorienting to say the least. The residents of Washington and its surrounding communities have been fortunate to have community members, churches and other organizations helping those affected, but the work takes months and even years before it is done.

Just like every other disaster site we’ve visited, we’ll never forget the courage and resilience of the people we met in Washington this past weekend. We had a great team of volunteers who were very flexible in terms of the variety of work we were asked to perform. Volunteer work is about doing what’s needed for the people you serve.  Our Headwaters Relief volunteers did exactly that!